Caribbean Cement Company Limited and the Government have signed a memorandum of understanding for a national programme that will allow for end-of-life tyres located at Riverton city and other disposal sites across the island to be disposed of by the cement company.

Under this 10-year National Programme for the Environmentally Sound Management of End-of-Life Pneumatic Tyres, Carib Cement will safely destroy approximately 320,000 tyres a year, which will be used to make clinker – a nodular material used as the binder in cement products.

Costs associated with the programme, which includes an inventory of the tyres and the sorting, handling, and transportation from disposal site to Carib Cement, will be borne by the Ministry of Local Government and Rural Development/ National Solid Waste Management Authority and the Ministry of Housing, Urban Renewal, Environment and Climate Change.

The programme will be implemented on a phased basis with the first phase beginning on July 1, 2021 and ending on June 30, 2031. It will target over two million used tyres at the Riverton City disposal site.

Phases two and three, which will commence on July 1, 2026, and end on June 30, 2031 and will see the development and implementation of an action plan to facilitate the ongoing collection and disposal of tyres at seven other disposal sites.

In his address at the signing ceremony at the Banquet Hall at Jamaica House on June 22, Prime Minister, the Most Hon. Andrew Holness, lauded the cement company for this initiative, which forms part of its social impact programme in protecting the environment.

“We are very happy that you have come on board, and we congratulate you in your social and corporate consciousness for doing this,” he said.

“It meets this government’s mandate of sustainable use of our resources and the protection of our environment while at the same time promoting economic growth and prosperity for the people of Jamaica,” he continued.

Mr. Holness used the opportunity to encourage other private sector companies to create similar initiatives to dispose of the tyres.

Meanwhile, Minister of Local Government and Rural Development, Hon. Desmond McKenzie, in his remarks, noted that the signing of the MOU represents an important step for the National Solid Waste Management Authority (NSWMA) to get rid of the tyres that are spread across the various sites on the island.

He welcomed the initiative noting that it would help to reduce incidents of tyre burning, particularly at the Riverton disposal site, which has cost the taxpayers of the country some $400million between 2012 and 2015 to bring under control.

Managing Director of the Caribbean Cement Company, Yago Castro, for his part, underscored the importance of the initiative as an extension of the company being responsible corporate citizens and protecting the environment from the harmful emissions of greenhouse gases.
He also emphasized the importance of the initiative to parent company, CEMEX as it aims to reduce 35 per cent of CO2 emissions from cement products by 2030.

“Because of this project, we will be importing less fossil fuel into the island. Through the co-processing process of the tyres, rubber and other elements will make its way into clinker and cement. This will also align with our operations at CEMEX in reducing CO2 by finding alternative materials to be used in the processing of clinker/ cement for a full roll-out of delivering net-zero CO2 concrete to all our customers by 2050,” he said.

This national programme represents a comprehensive development of the successful pilot project, which was undertaken in 2019.

During the pilot, which ran from July to October over an 11-day period, a total of 6,000 tyres were consumed in kilns at the company’s Rockfort plant. 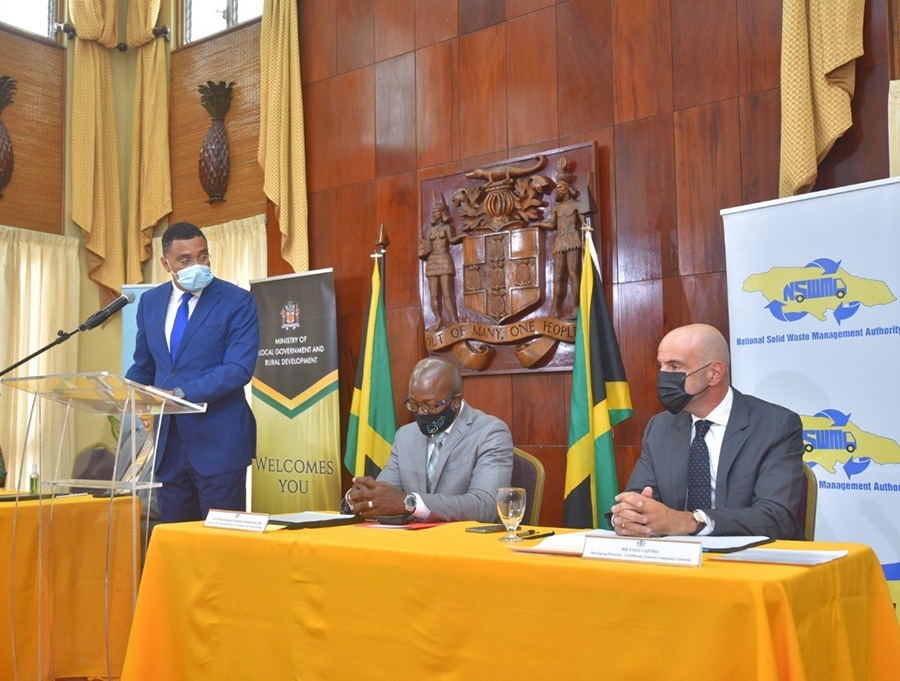 Managing Director of Caribbean Cement Company Limited, Yago Castro (right), listens attentively to Prime Minister, the Most Hon. Andrew Holness (left), at a ceremony to sign a memorandum of understanding for the disposal of tyres, at Jamaica House in Kingston on June 22. At (centre) is Minister of Housing, Urban Renewal, Environment and Climate Change, Pearnel Charles Jr.