The participants, who were final-year university students in Jamaica and who were a part of the initial cohort when the programme first launched in March this year, have been deployed to work in areas such as operations, security, and human resources.

This was disclosed by Managing Director of Carib Cement, Yago Castro, following Monday’s (October 4) virtual launch of the second iteration of the programme, which officially commences today.

“This is a very good example of how important and practical this is for us. We are really obsessed with the development of local talent, which we have a good amount of in the region. We believe that is the way forward,” he said.

Over the next five weeks, more than 50 students from across various countries in the region will participate in the programme and will be given first-hand knowledge of 15 key areas of the company from managers.

Among the areas to be covered during the initiative are cement technology, supply chain, human resources, lime operations and aggregates, commercial, social impact, finance, and planning.

The Carib Cement Managing Director urged the students to take full advantage of the programme, describing it as “a golden opportunity”.

“We are a diverse company. We will give opportunities to you if you show us that you have the willingness to do the work. You don’t have to work here but in other countries where we have operations such as in the United States or Europe,” he said.

Meanwhile, Managing Director of Trinidad Cement Limited Group Francisco Aguilera, in his remarks, echoed similar sentiments to Mr. Castro, noting that the programme is important in selecting the next generation of employees.

Chairman of Carib Cement, Parris A. Lyew-Ayee, for his part, said the programme has been designed to foster the development of capable and work-ready professional engineers and scientists into society, which will benefit the countries and universities represented. 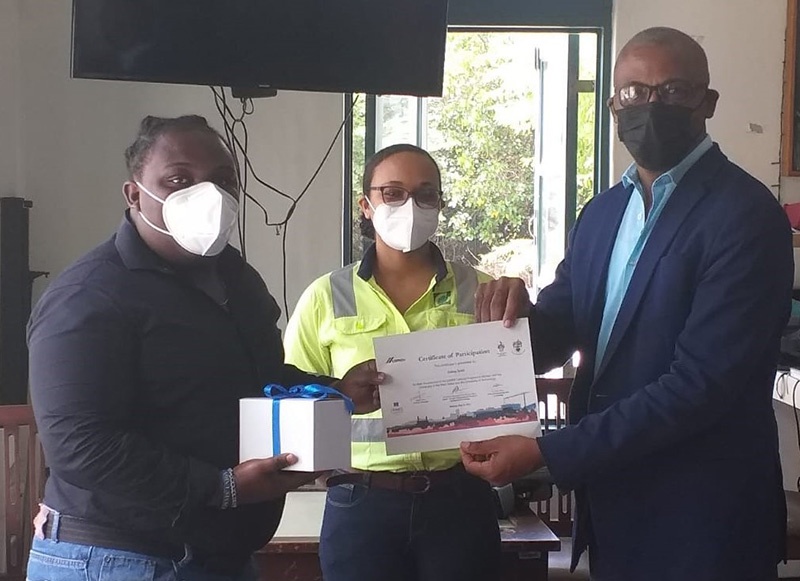 Talent and Compensation HR Coordinator at Carib Cement, Shantana Williams (centre), observes as former CEMEX Campus participant, Kidroy Scott (left), who now works in security, receives a token and certificate from the University of Technology’s Dean of the Faculty of the Built Environment, Dr. Garfield Young during the first iteration of the Carib Cement-hosted CEMEX Campus, at the cement company’s Sports Club recently.