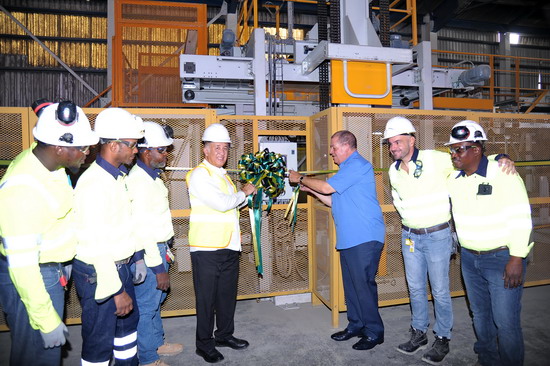 [February 10, 2019] Caribbean Cement Company has inaugurated a new palletizing machine as part of its ongoing modernization and transformation of the Rockfort based plant.

The occasion was marked by a brief ceremony which included the blessing of the Most Reverend Kenneth Richards, Archbishop of Kingston and  remarks by: Parris Lyew-Ayee, Chairman of Carib Cement; Yago Castro, General Manager of Carib Cement and The Honourable Audley Shaw, Minister of Industry, Commerce and Fisheries.

Minister Shaw reaffirmed the Government of Jamaica’s commitment to the development of local industries and commended Carib Cement for meeting the needs of the market, especially within the context of a boom in housing developments.

“This is an important industry for Jamaica. I’m happy to see that Carib Cement is stepping up investments in the construction sector. We salute this new initiative and thank Carib Cement for putting in the levels of investment you have been putting in,” Minister Shaw said.

Yago Castro, General Manager of Carib Cement said the palletizer, which was commissioned within schedule by a team led by Christopher Bryan, Projects Manager, is the most advanced machine available in the market and has already brought efficiency and improvements to the packing process.

The VENTOMATIC © POLIMAT ® Palletizer, described by makers, Danish company FLSmidth as state-of-the-art, is one of two new packing equipment acquired by Carib Cement. While one machine is already up and running, commissioning of the second VENTOMATIC © POLIMAT © is underway.

Carib Cement has been undertaking major capital expenditure (CAPEX) projects over the past three years. This includes the installation of new equipment, repairing or upgrading of others, and a major demolition exercise which saw defunct equipment removed from the plant after decades of having been decommissioned.

“We have invested at least USD50 million in the last three years and we have a five-year multi-year investment plan which will see USD10 million invested in CAPEX per year. We will continue to invest what is necessary to meet the needs of the market, develop our local talent and invest in the right capex in order to make Carib Cement the best plant in the whole Caribbean,” Mr Castro said.

Caribbean Cement Company is the largest manufacturing company in Jamaica and a member of global building materials company CEMEX. Between 2015 – 2018 JMD7.2 billion have been invested in Carib Cement.