Woodside, St Mary marks August 1 each year with a gathering of residents and visitors who reenact the declaration of emancipation. This year’s activities will be particularly special as they will also be celebrating the long-awaited establishment of the Woodside Ancestral Garden.

Meant to be a sacred space, the Ancestral Garden pays homage to the convergence of Taino, African and European presence in the area. It is hoped that the Garden will increase the number of visitors to the area, reignite community tourism, provide employment for residents in the capacities of bed and breakfast hosts and tour guides; stall rural urban drift and help young people to be more optimistic about the future of their village.

The community was able to bring to life the dream of the Ancestral Garden, conceptualized more 15 years ago, after emerging winner of the Caribbean Cement Company Limited’s Build Your Community Competition last year and earning the prize of a community development project valued at five million dollars.

Acting on the specifications of the community’s proposal, contractors commissioned by Carib Cement transformed an area which was mostly a roughly cleared space surrounded by bushes and which was accessible only by careful, gingerly descent down a slope. The work crew, including tradesmen and labourers from the community, installed: concrete benches, a symbolic replica of a Taino hut, railings, concrete steps, concrete pathways, protective barriers, signage and a  wall of honour on which names of enslaved persons who worked on the former coffee plantation in the area will be mounted. Carib Cement also renovated restrooms, provided a water tank, paved a section of the road entering the community and donated a string trimmer (weed-whacker) to help with the ongoing clearing of bush and brush. This and other improvements to the area make the space easily accessible and welcoming for either hosting events or for quiet individual reflection.

“Strong, cohesive communities help to build a greater Jamaica and  one of the aims of the Carib Cement Build Your Community competition was to reward a community which is able to work together to win and thereafter, successfully maintain the infrastructure. Woodside is a model community and we are pleased to have played a role in its history and development by bringing to life their dream of an Ancestral Garden,” said Klao Bell-Lewis, Manager Communication and Community Outreach at Carib Cement.

Situated within Central and Western St. Mary, Woodside is a farming community located close to Highgate and Guys Hill. Four sites in the area have been declared national heritage sites by the Jamaica National Heritage Trust, namely:  Dryland or “One/Long Bubby Susan”, a cave with a petroglyph; St. Gabriel’s Anglican Church; Taino Steps and “Daddy Rock”.

Dr Erna Brodber, renowned scholar has been at the centre of the strong community bonds within Woodside.

“It is rare for companies to think in terms of communities of people, yet it is so important that they do so. The Caribbean Cement company in thinking in such terms is putting its money where its thinking is, putting its support to Jamaica at the nation’s heart. We are thankful for the support of our community, the Anglican Church, the Jamaica National Heritage Trust and so many others who have made this possible,” Dr Brodber said.

Participating in a handover ceremony held on Tuesday, February 26 at the Ancestral Gardens were: Reverend Father Seymour Hutchinson, pastor of six churches within the parish, including St. Gabriel’s; Robert “Kalaan” Pairman, Kasike of the Jamaican Hummingbird Tribe, along with his wife, Ronalda “Kaikotekina” Pairman and their daughter Tanama-Areyto; Ms Angela Heron, Mr Evon Brodber and Mr Dennis Clarke Members of the Board of the Woodside Foundation; Mr Lennox Boyd, President of the Woodside Community Action Group, Dr Amina Blackwood Meeks, Founder of the Storytelling Foundation of Jamaica; His Worship the Mayor Councilor Richard Creary, Mayor of Port Maria and Carib Cement executives.

The Woodside Community Action Group is the winner of the Carib Cement Build Your Community Competition, earning the prize of a development project valued at JMD 5million.

Carib Cement will assist Woodside with developing an “Ancestral Garden” which the community has identified as a step toward enhancing the potential of its community tourism programme. The creation of the Garden includes installation of amenities such as benches, a gazebo, and a pathway which will better define the space and facilitate more visitors. Carib Cement will execute the project.

Situated within Central and Western St. Mary, Woodside is a farming community located close to Highgate and Guys Hill. The area is rich in history with extensive research having revealed its Taino, African and British heritage. A commemorative Emancipation Day ceremony has been held in the area on August 1 since 1995, and in 2015, four sites in the community were recognized as National Heritage sites by the Jamaica National Heritage Trust.

“We congratulate Woodside for winning this competition and hope the project, once complete, will contribute meaningfully to the community’s broader goals of implementing creative, sustainable programmes,” said Klao Bell-Lewis, Communication and Outreach Manager at Carib Cement.
Woodside had been seeking development support for some time and consider this win to be a boon to its objectives. In its proposal, the Woodside community said: “We who live in Woodside, St Mary applaud this gesture. It is rare for companies to think in terms of communities of people, yet it is so important that they do so. The Caribbean Cement company in thinking in such terms is putting its money where its thinking is, putting its support to Jamaica at the nation’s heart.”

Among Carib Cement’s objectives for the competition were: contributing to Goal One of Jamaica’s Vision 2030 and Goal 11 of the United Nations Sustainable Development Goal, which both recognise the importance of safe, inclusive and accessible public spaces and their role in contributing to healthy lifestyles and communities. The competition also supported the Social Development Commission’s thrust to promote community engagement, formal registration and self-governance. The SDC has identified 775 communities in Jamaica.

“The SDC congratulates the Carib Cement for an excellent model of Corporate Social Responsibility demonstrated in their execution of the innovative Build your Community Competition. A best practice in community development where communities are involved in identifying and designing strategies aimed at improving their quality of life, was a major prerequisite for sustainability and an important feature of SDCs approach. Therefore, the SDC is pleased to know that each project applications emerged from actual developmental priorities as identified from the spaces and informed by data,” said Omar Frith, Deputy Executive Director of the SDC

The competition went through several phases and required formally recognized and organised communities to demonstrate that there was consensus around a project and capacity to sustain it. Requirements also included evidence that the project: will improve the life of the community, fits within the development priorities of the community and would meet the approval of the municipal authorities.

Forty-six communities from 13 parishes entered the competition and the highest number of submissions came from St Catherine followed by St Andrew, with St Thomas, Manchester and Kingston tying for the third-highest number. Parks, community centres, and playgrounds were the top three projects proposed.

“This competition has highlighted that there are many strong, organized communities which are cooperating effectively to develop their neighborhoods. The needs within the communities are common, and it is mainly for safe, multifunctional spaces which can be used for wellness, entertainment and educational purposes,” Mrs. Bell-Lewis said. 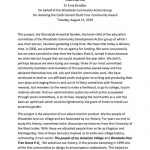